From 1985 – 2012, there have been unambiguous divergent trends between the incarceration rates and crime rates: 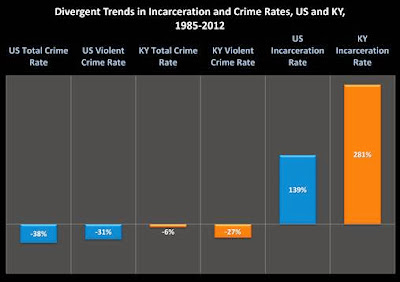 During this period, many believe that the drop in crime is primarily caused by the enormous increase in incarceration and the decrease in release. However, the “reality is far more complex…. [A]bout 25% of the decline in violent crime can be attributed to increased incarceration. While one-quarter of the crime drop is not insubstantial, we then know that most of the decline in crime — three quarters — was due to factors other than incarceration.” See:  Ryan S. King, Marc Mauer, Incarceration and Crime: A Complex Relationship (2005) at 3,4

These facts support a less costly response to crime in the context of declining crime rates. “During the last 30 years of incarceration growth, we have learned a great deal about the financial and social costs and limited effectiveness of incarceration on crime rates. While incarceration is one factor affecting crime rates, its impact is more modest than many proponents suggest, and is increasingly subject to diminishing returns. Increasing incarceration while ignoring more effective approaches will impose a heavy burden upon courts, corrections and communities, while providing a marginal impact on crime. Policymakers should assess these dynamics and adopt balanced crime control policies that provide appropriate resources and support for programming, treatment, and community support.” Id. at 8.

The good news: many policy makers are paying attention, including Kentucky policy makers. According to a Pew December 2013 Report, in the last 5  years, often with the assistance  of that Pew's Public Safety Performance Project, “the majority of states reduced both crime and imprisonment rates. The relationship between crime and incarceration is complex, but states are showing that it is possible to reduce them at the same time.” That has been what has occurred in Kentucky with the help of Pew.
There is energy from people along the entire political spectrum for commonsense criminal justice reform. In a 2003 article Three Strikes And You're Broke, Cal Thomas reflected what people are thinking, “After two decades of being ‘tough on crime’ by ‘locking them up and throwing away the key’ - to recall two of the effective political slogans of the past - the bill has come due. ….What are taxpayers getting for their money? They get a false sense of security, as if putting current criminals behind bars insures there won't be future criminals. If locking up everyone now committing crimes would eliminate crime, I'd be all for it, but new criminals are born, or made, every day. Something is wrong with the system….We do retribution well. We should be focusing on restitution.”
The December 2013 Pew Report demonstrates that “Prison decline has little impact on crime rates.”
Pew's Public Safety Performance Project works with states to advance data-driven, fiscally sound policies and practices in the criminal and juvenile justice systems that protect public safety, hold offenders accountable, and control corrections costs. Read more about Kentucky’s decline in imprisonment and crime rate in the last  5 years and how Kentucky ranks compared to other states in the December 2013  PEW Report, States Cut Both Crime and Imprisonment at this link.