Asa Gullett was charged and convicted of incest, rape, sodomy, and first and second-degree sexual abuse. Trial counsel discovered immediately after trial the jury foreman had withheld information that her close family members had been prosecuted for crimes in that county. Counsel moved for mistrial, stating they would have moved to strike her for cause or exercised a peremptory challenge. The trial court denied the motion for mistrial, and gave instructions that allowed non-unanimous verdicts on sodomy and first-degree sexual abuse.

The Kentucky Supreme Court vacated Gullett’s convictions and remanded the case for a new trial due to the juror’s misconduct. The Court ordered that in the event of a retrial, the sodomy and sex abuse instructions must be corrected to avoid non-unanimous verdicts. Susan Balliet represented Asa Gullett on appeal, and Elizabeth Curtin and Melanie Foote represented him at trial.
at 12:15 PM 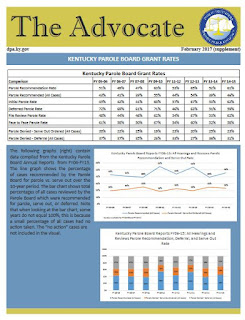 Supplement to the February 2017 edition of The Advocate

February 2017 Edition of The Advocate Online 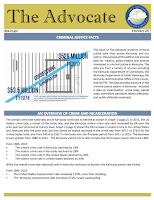 FEATURED IN THIS MONTH'S ADVOCATE: FEBRUARY 2017
THE DEPARTMENT OF PUBLIC ADVOCACY CRIMNIAL JUSTICE FACTS OVERVIEW EDITION. THIS EDITION INCLUDES:
at 6:34 AM