Mr. Dudley was arrested on September 9, 2004, and indicted in December 2004. However, he was not tried until 2014. In 2016, the Court of Appeals remanded for the trial court to hold a hearing and make findings as to whether Mr. Dudley’s right to a speedy trial had been violated. The trial court found Mr. Dudley’s right to a speedy trial had not been violated. Specifically, the court found that although a nearly 10-year delay between arrest and trial was presumptively prejudicial, Mr. Dudley was responsible for the delay because he had not returned to Kentucky to answer to his charges.

A panel of the Court of Appeals disagreed. The panel cited the following facts showing that the delay was caused not by Mr. Dudley, but by government negligence: 1) Circuit Court personnel were aware that Dudley was not present at his arraignment in December 2004 because he was in custody in Ohio; 2) neither Dudley or his then-attorney was made aware that he had been indicted; 3) while a bench warrant was issued on December 20, 2004, that warrant was not served on Dudley until 2014; and 4) even though the government was aware that Dudley was in custody in Ohio, neither a detainer nor a holder was filed until 2012. When Dudley was informed about the holder in 2012 or early 2013, he immediately filed an IAD request to be returned to Kentucky.

Mr. Dudley testified at the 2016 hearing that a Covington police officer involved in his arrest testified at his 2005 Ohio parole revocation hearing. However, the officer did not inform the Ohio court or Dudley that Dudley had a pending Kenton County indictment or pending warrant for his arrest. The court did not cite this in its reasoning.

Thus, the panel found, Mr. Dudley’s Sixth Amendment right to a speedy trial was violated. The panel remanded with an order for his indictment to be dismissed.

Matt Ryan, formerly of the Covington Office, was counsel for Mr. Dudley. Julia K. Pearson of Appeals represented Mr. Dudley on appeal.
at 5:41 AM

Commonwealth v. Jackson and Commonwealth v. Denson, Kentucky Supreme Court, to be published (9/28/17):
The Supreme Court held that the new ten-year lookback provision of the DUI statute (KRS 189A.010) does apply to even those defendants who have prior convictions more than five years old that had already “expired” under the prior version of the statute.
Re: the argument the Commonwealth was violating contract law by not honoring the five-year lookback periods specified in the defendants’ prior plea deals, the Court held it is not reasonable for a defendant pleading guilty under the agreement to infer the future ramifications of his conviction would cease after five years.  From the language employed in the plea agreement, a reasonable person could not construe the intent of the boilerplate language parroting the statutory range of penalties for a DUI conviction as a promise by the Commonwealth limiting the future effect of the conviction so as to immunize the defendant forever thereafter from future legislative modifications of the lookback period.
The Court also found the amendment to the statute does not violate ex post facto principles (“they are not charged with a crime that was legal when committed but was rendered illegal by the 2016 amendment”) and Boykin does not bar application (“[t]he fact that subsequent legislative measures may unforeseeably alter the consequences and effects of the criminal conviction does not take the plea retrospectively outside the scope of the Boykin requirements”).
at 1:28 PM

The court placed Sturgill under oath and asked him a series of questions about why he wanted to withdraw the pleas.  Defense counsel and the Commonwealth then did the same.  During questioning from the Commonwealth, Sturgill said the plea was “against my will” and he had not wanted to do it.  Neither defense counsel nor the court followed up with any questions about that statement.  The court found Sturgill’s testimony to be “incredible” and said Sturgill simply changing his mind or having regrets was not sufficient reason to withdraw the plea.  The court sentenced Sturgill to the agreed-upon sentence.

On appeal, the Court of Appeals vacated and remanded the convictions.  It found Sturgill was denied effective representation at the withdrawal hearing because defense counsel adamantly opposed Sturgill’s attempt to withdraw his pleas.  It said it was troubling that defense counsel did not specifically ask why Sturgill felt he made the pleas against his will.  On remand, Sturgill will be returned to the point in time between when he accepted the guilty plea and before he sought to withdraw it.  Steven Buck represented Mr. Sturgill on appeal.
at 8:43 AM 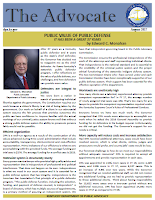