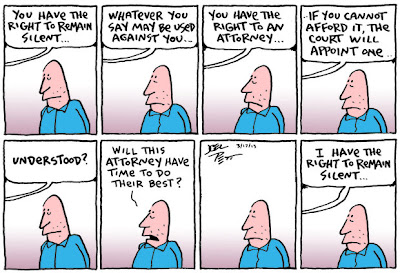 Poor defendant won for all 50 years ago
By Ed Monahan and Dan Goyette
Imagine your daughter, brother or best friend were arrested. Surely, you would urge him or her to seek counsel to ensure that his or her rights were protected, regardless of guilt or innocence, so that the best result could be achieved under the circumstances.
This is a special time to recognize the importance of that right to counsel. We are in the 40th year of the statewide public defender program established in 1972 by Gov. Wendell Ford, who appointed Tony Wilhoit as the first chief defender.
It is also a special time because March 18 is the 50th anniversary of the landmark U.S. Supreme Court decision in the case of Gideon v. Wainwright. The ruling requires the state to provide counsel to a person too poor to hire an attorney when charged with a felony. The court has continued to expand the right to counsel to any charge that places a person's liberty at risk.
Complete article