KYA - Youth Incarceration on the Decline: Kentucky Still Confining Too Many Youth for Behaviors that Aren’t a Risk to Public Safety 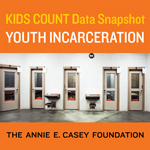 The national rate of locking up young people in trouble with the law dropped by more than 40 percent over a 15-year period, with no decreases in public safety, according to a new report released by the Annie E. Casey Foundation today.

The KIDS COUNT Data Snapshot indicates that the number of young people in correctional facilities in the United States on a single day fell to 70,792 in 2010, from a high of 107,637 in 1995. The report also shows that the overwhelming majority of confined youth in the United States are charged with offenses that do not put public safety at risk, such as running away or violating probation. In 2010, only one of every four confined youth across the nation was locked up due to a violent offense (homicide, aggravated assault, robbery or sexual assault).

While Kentucky’s downward trend shows a move toward being smarter, and not just tougher, on crime, there is still vast room for improvement. An analysis by Kentucky Youth Advocates of data from the Kentucky Department of Juvenile Justice and Louisville Metro Youth Detention Services shows that only 3.8 percent of youth that were locked up during 2007-2011 were confined for violent offenses. This means that only a very minor number of confined youth pose a threat of harm to community safety.

For behaviors such as truancy and running away, which would not be considered crimes if the youth were adults, evidence-based programs can effectively address the underlying causes of behavior. Many states have implemented “Children in Need of Services” models, which recognize that there are family dynamics involved in youth misbehavior, such as running away, and work to address what is really causing that behavior. These models are more effective than confinement for minor offenses and are also less expensive.

You can find the snapshot and data on youth in confinement in the KIDS COUNT Data Center.